But somehow, we want to not following or see someone’s updates/tweet. In twitter, we can just unfollow. And we can remove friends from facebook, but in facebook there is so many consideration. 🙂

So, if you want to still being their ‘friend’ on facebook, you can just hide updates from some people. For example, i don’t want to following updates from Inpisibel (Wijayanto Eka), so just over mouse cursor to Wijayanto’s update, and klik the X icon.

Wijayanto's Update will no longer appear

You can see your news feed setting also. 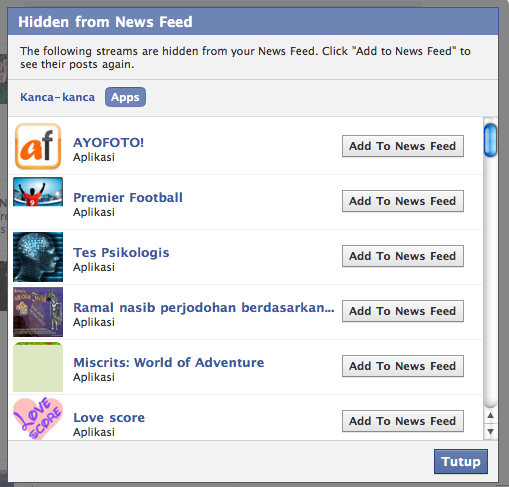 See the long scrollbar, You can see Â that i hide so many apps to make my news feed clean. 🙂

PS: I use Jawa Language on Facebook, I currently follow Wijayanto’s Update. This is just for example. 🙂